The 2022 Winter Olympics Embrace Natural Refrigerants, Set the Stage for the Future

For the first time, a trans critical CO2 refrigeration will be used to make ice at a Winter Olympics, which will be hosted by Beijing in 2022, with the International Olympic Committee deciding to use CO2 refrigeration system for the most iconic venues for the Beijing Olympics. The decision, which the Beijing 2022 Organizing Committee announced as part of a joint alliance with the United Nations (UN) for the Climate Action framework agreement, led by the IOC, will decrease the overall carbon footprint of the Winter Olympic Games in Beijing.“This is a landmark decision which could potentially help address the issue of climate change, both in China and even globally,” said Juan Antonio Samaranch, chairman of the IOC Coordination Commission for the upcoming winter games. “We are pleased to see that the IOC’s close collaboration with Beijing 2022 has resulted in such an important outcome.” 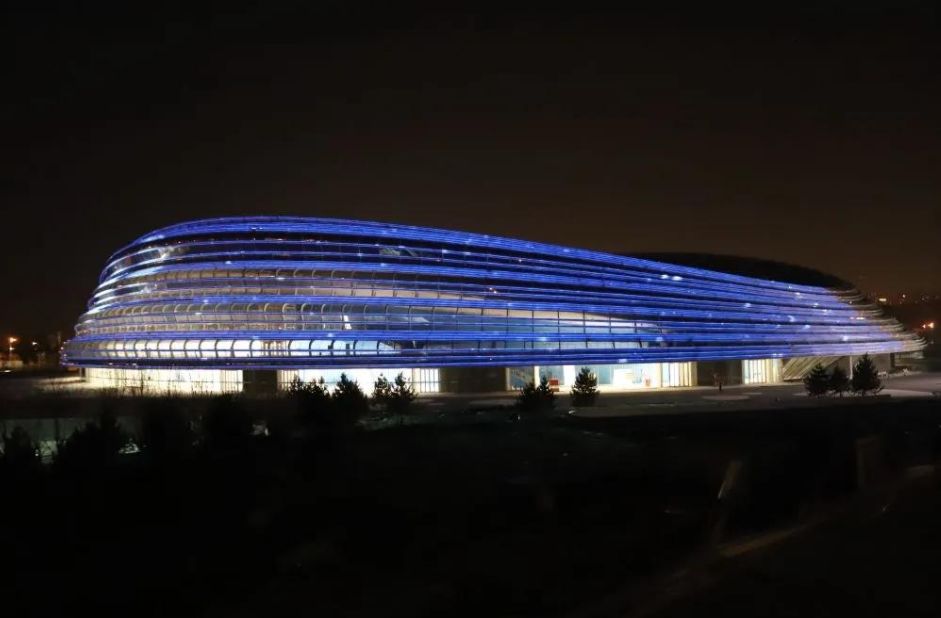 Guy Evon Cloutier, CEO of the CTC Group and IIAR’s regional vice chair for China and Asia, said the legacy and sustainability of the games as set by the IOC with the Beijing Organizing Committee Olympic Games is very ambitious and was a top priority. CTC is the strategic partner of CIMCO Refrigeration for the Olympic Projects in Beijing. The company has been active in China since 1999, ever since promoting and developing projects for ice and snow in Asia.

The decision to use natural refrigerants was made possible due to close collaboration between Beijing 2022, International Sports Federations and the IOC, which provided guidance and technical expertise on the topic.

Yumin Liu, general director for the venue planning and construction department of the Beijing 2022 Winter Olympics Organizing Committee (BOCOG), said there will be eight competition and non-competition venues, with nine pieces of ice. According to the IOC’s website, CO2 refrigerant, which have no impact on the environment, will be used in the Beijing 2022 speed skating venue and some of the training venues. Ammonia is being used for the sliding center for the bobsleigh and luge competitions and refrigerant R449 is being used for ice hockey and curling venues.

“China is trying to make a statement with these legacy rinks that will be around for a long time,” said David Fauser, director of sales for CIMCO Refrigeration, a division of Toromont from Canada. "China showed real leadership here in terms of these games. The world looks at it, and that is how you make a worldwide change."

The National Speed ​​Skating Stadium, also known as the “Ice Ribbon,” is the only new ice competition venue in the Beijing Winter Olympics Park. The main stadium covers an area of ​​about 80,000 square meters and can accommodate 12,000 spectators. The total ice surface can cover up to 12,000 square meters, almost equal to the size of a track and field. The National Speed ​​Skating Oval's interior has adopted an all-ice surface that can meet the competition requirements of five major ice sports: speed skating, short track skating, figure skating, curling and ice hockey, as well as public skating and special events and performances. The multi-purpose design concept is a first in the world, no other speed oval has such configuration and capability, Cloutier said. 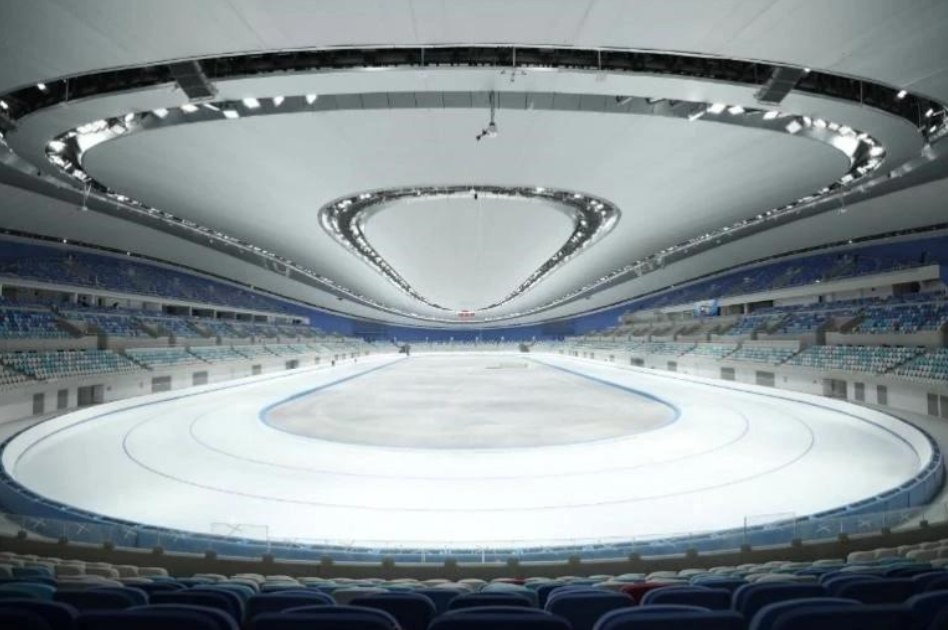 Beijing 2022 also joined the UN Sports for Climate Action framework, which UN Climate Change launched in December 2018. Its goal is to set a clear trajectory for the sports community to contribute to global climate goals. Beijing 2022 is one of almost 40 sports organizations that have agreed to the framework so far. Others include the Organizing Committees for the Olympic Games Tokyo 2020 and Paris 2024.

Xinrog Zhang, chairman of the Beijing Energy Society, said most refrigerants on the market contribute to the greenhouse effects and are detrimental to the ozone layer. "On the other hand, carbon dioxide is a natural and green refrigerant that is friendly to the environment," he said. "Liquid carbon dioxide absorbs heat as it evaporates, making refrigeration and ice-making possible. When it releases heat, we can recycle the heat."

Wayne Dilk, senior vice president of CIMCO and specialist of Olympic projects, said the Beijing Olympics could provide additional opportunities for natural refrigerants in the future. "This being the first trans critical oval in the world for the Olympics and will be a benchmark, and China is already broadcasting in a big way," Dilk said.

As part of a four-party consortium, CIMCO Refrigeration, was contracted to provide the ice rink consulting services for the project, which includes reviewing the conceptual system design, making recommendations and the modifications and final engineering to meet to the design criteria, and developing and overseeing the project installation and the commissioning within the quality control parameters for an Olympic project.

The CO2 trans critical system being used consists of a CO2 system with a nominal capacity of 4000 KW (1,140 TR) at 18°C SST and 38°C SCT. The trans critical CO2 include six packages with each six compressors, six adiabatic gas coolers one for each system, and four CO2 recirculation vessel packages each with 2 CO2 pumps together connected to common suction and liquid supply manifolds.

The floor design consists of 10 separate refrigerated floor zones, including two speed skating tracks, one warm-up track and two ice rinks each with dedicated pumping systems. The other six zones are connected into two separate pumping systems, but with individual zone valves and temperature control.

The floor network is constructed of stainless pipe of different sizes with stainless headers all sized to provide the optimal flow rates to maintain uniform temperature all over the ice surfaces.

Carrier is providing the CO2 prefabricated refrigeration systems, manufactured by their Green & Cool division and imported from France. Carrier has a also a joint venture in China with Haier established in 2001, providing local heating, ventilating and air conditioning, refrigeration, fire, security and building automation technologies for the China market.

In a statement, Carrier said a CO2 trans critical for ice making is the most environmentally responsible technology in the world with direct carbon emissions close to zero, thanks to the low GWP of the refrigerant. What's more, the advanced technology can control ice temperature variances within 0.5 degrees. For post-Olympic operation, it can save nearly 2 million KWh of electricity each year, making the venue sustainable for the long term. 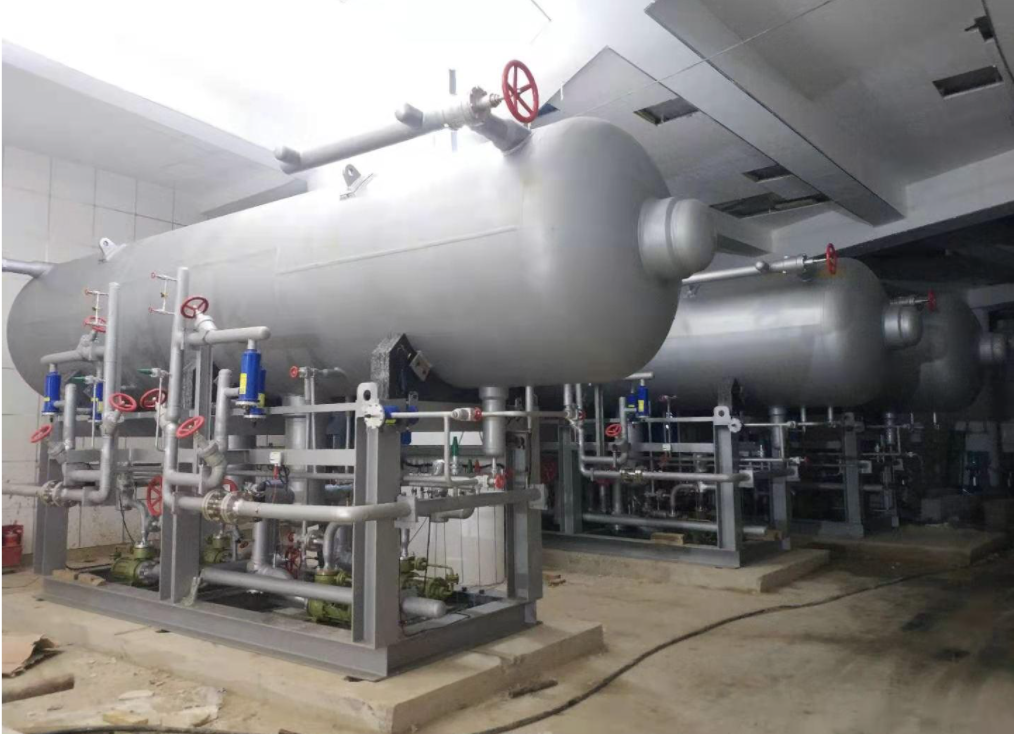 The refrigeration system designed for our speed skating oval will allow us to control the ice temperature within 0.5°C (0.9°F). Xiaonan Wu, board chairman of the Beijing National Speed Skating company, said carbon dioxide refrigeration could help make the oval with the most possible even temperature across the ice.

The waste heat generated during the refrigeration process will be fully recycled and used for the stadium ambient heating, hot water for ice making process and showers, ice melting, and the efficient control of temperature and humidity all year around. The heat recovery system will save two million kilowatt-hours of electricity every year, Wu said.

Different sports require different temperatures of ice, Dilk said. The ability to maintain accurate temperatures should benefit athletes, Fauser said. “When it is trans critica, it really does create the best ice because there is no temperature difference across the floor,” he said. “For an Olympic event where every second matters, that is important. As long as the ice is well-leveled and maintained, it should be the fastest ice.” 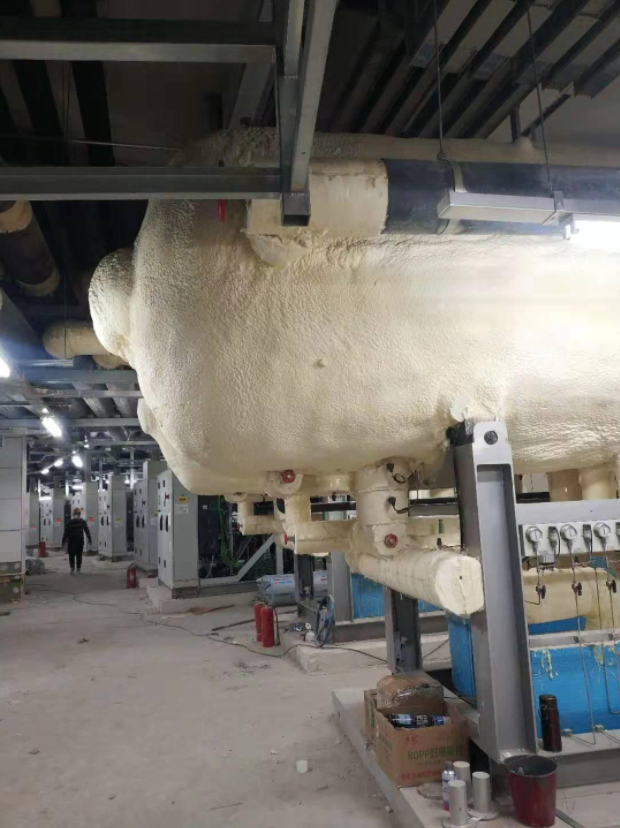 The IOC mandates that the ice surface is ready for international competition the winter before the Olympics, Dilk said. "That timeframe leaves timing a little bit more difficult because you have access a year earlier, and there is a lot of planning that goes into it,” he said.

The speed skating oval was completed on Jan. 22 with the making of the first ice sheet. From April the ice will be on permanently used and start to host pre-Olympic games competitions.

There have been some challenges with creating the new venues, including the global pandemic. "COVID-19 was by far the biggest challenge, with the restriction to bring to China some of our overseas experts," said Cloutier, who has lived in China since 2002 and has been involved in the Olympic projects in Beijing since the beginning.

Some unique design requirement by the organizing committee and operation team had issues to be addressed. For example, the Ice Ribbon has a fourth speed skating track. “That caused some piping design challenges. The final design allows for the whole surface of 12,000 square meters to be covered with ice, or different section independently as needed. This is a first time, no other speed oval speed oval in the world has this layout design, he says. 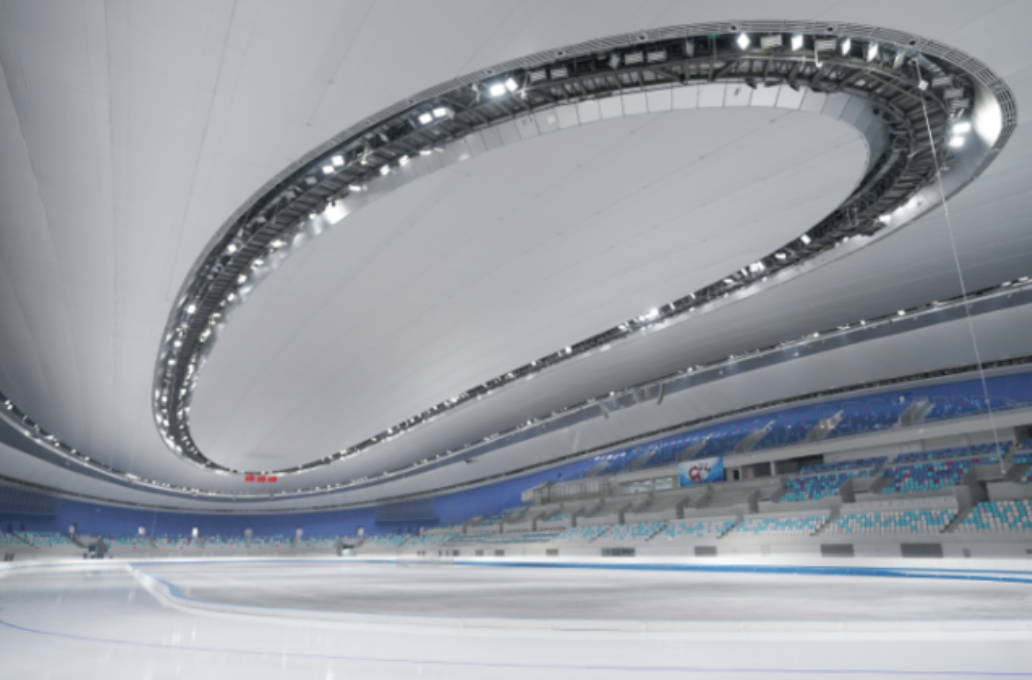 Dilk said that even though CO2 is highly efficient, GHG friendly, and consumes less electrical, there are some drawbacks, including the amount of floor space needed. The central system consists of six CO2 packages, each having six compressors, as opposed to five larger compressors as normally used on an ammonia system. Lifecycle and maintenance costs are possibly different, but at the present time there is no real data available for such bigger plants, he said.

The hardest part of building Olympic venues is they’re only done every four years, but Dilk said CIMCO has an advantage because it has worked on Olympic venues in the past. CIMCO was involved with the engineering and supply of the ice surfaces for the Winter Olympic Games in Vancouver and Calgary in Canada, Dilk was involved in both projects.

Canadian Ice and Snow and refrigeration specialists, CTC is the strategic partner of CIMCO and Pan China Sports and is active in China for more than 15 years and is a leading provider of world-class consulting services, project management and integration of systems for Ice and Snow projects, should it be for ice rink, snow dome, snow and ice playground, curling, custom ice surface, for sports or leisure, indoor or outdoor. The company also offers total Solutions, integrated and adapted to the specific needs of each project, from planning, design, engineering, technologies, installation, after sales support, facility management, operation and sports content. CTC built Asia’s first Air Dome Ice Rink in Beijing.

CIMCO Refrigeration, a division of Toromont Industries Ltd. is a Canadian company founded 107 years ago, a world recognized pioneer and leader in the field of ice and snow and refrigeration engineering and technologies, with more than 6,000 ice and snow projects successfully completed around the world; CIMCO’s highly skilled professional refrigeration designers and engineers have been providing reliable, cost effective and energy efficient solutions to our customer, the Winter Olympic games and the NHL, among other. Our global vision and understanding of the multiple details and disciplines related to sustainable operation of sport, recreational and industrial complexes, does enable us to provide the right and adapted solutions to a wide range of projects and specific requirement.

IIAR is the world's leading advocate for the safe, reliable and efficient use of ammonia and other natural refrigerants. IIAR members share their collective knowledge and experience to produce consensus documents that address various aspects of the natural and industrial refrigeration industry. IIAR has broad industry representation including manufacturers, design engineers, contractors, end users, academics, scientists, and trainers. IIAR sets the standard for providing advocacy, education and the most up-to-date technical information to the ammonia and natural refrigeration community. We help professionals develop their skills and further their careers by promoting the common interests of our growing membership.

Our vision is to create a better world through the safe and sustainable use of natural refrigerants.

Our mission is to provide advocacy, education, and standards for the benefit of the global community in the safe and sustainable design, installation and operation of ammonia and other natural refrigerant systems.