Methods of making snow indoors include using crushed ice, shaved ice, cryogenic snowmaking and hoar frost growth systems. However, none of these approach the look, the feel and the performance of real snow.

CTC, "The Ice & Snow Specialits from Canada" in partnership with TechnoAlpin, the world leading manufacturer of snowmaking devices, bring the best solutions for indoor snow technology. Our method to produce real snow is based in the natural snowing process. To do so, we have designed an integrated snow making system composed of snowmakers, coolers, flooring and heat recovery that when working together produce the best quality snow with the highest cost-efficiency standards.

Step 1
Every night, after the facility closing, before the production of new real snow, the surface is groomed. The new snow production process starts when pre-chilled water at +1ºC and compressed air are pumped to the snowguns through hose systems

Step 2
Atomized water is sprayed to the environment through microholes in the snowgun nozzle. Ice particles of 10 microns become the nucleus around which the perfect crystals form, creating the real snow

Step 3
During the snow production process, a temperature of about -6ºC is maintained inside the facility. This is achieved by using a series of coolers integrated into the snowmakers.

Step 4
Once the snow is produced the temperature of the facility can be risen to -2ºC. The floor cooling system maintains the quality of the snow. Pex pipelines circulating glycol refrigerant beneath the snow surface keep the temperature below 0ºC. Chillers cool the glycol at -16ºC. 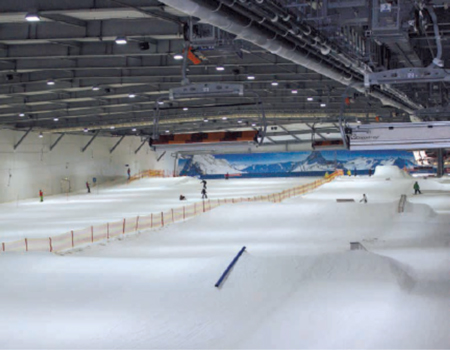 Step 5
A heat recovery system supplies the energy to melt the removed snow and to heat the under floor, preventing the cooling of the structure of the building. 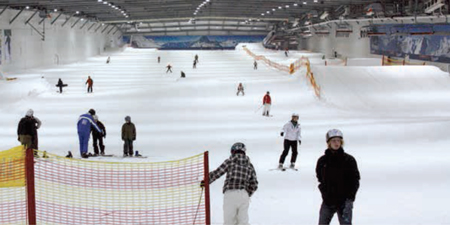 Real Snow is defined as ice particles that grow in flight through the air, forming snow crystal structures. Indeed, there exist over than 250 kinds of snow crystals.

Dense spring snow is slower and allows beginners more control, while densities such as dry champagne powder are used for other ski runs. Our system can produce snow of densities from 100 Kg/m3 to 300 Kg/m3.